WHAT IS ROSH HASHANAH?

In the Bible, Rosh Hashanah is called The Feast of the Memorial of the Blowing of Trumpets. It takes place on the first day of the seventh month and ushers in the Fall Feasts!  It starts off the Ten Days of Awe. These are days of soul searching and repentance leading up to Yom Kippur (the Day of Atonement), the holiest day in the Jewish calendar. Five days later is Succot (the Feast of Tabernacles) where we eat, sleep, and live in booths for seven days to remember God's provision in the wilderness.

Rosh Hashanah is traditionally the anniversary of the Creation of the world.

Hamelech (“the king”) is an oft-occurring word in the Rosh Hashanah prayers, whose dominant theme is our coronation of God as King of the universe and our submission to His sovereignty.

The main meditation is on God as King. As Messianic Believers in Yeshua the Messiah, we recognize Him as King of kings and Lord of lords! "Then the end will come, when he hands over the kingdom to God the Father after he has destroyed all dominion, authority and power." (1 Corinthians 15:24)

The two-day celebration of Rosh Hashanah is referred to as yom arocha - a long day; i.e., the forty-eight hour observance of Rosh Hashanah is considered one extended day. Both days are sanctified definitively [in contrast to the second day of the Festivals celebrated in the Diaspora, whose sanctity is based on doubt].

This day is also called Yom Ha'Din (The Day of Judgment), and we recognize God's right to make judgment on humans and our accountability to Him for our actions because He is King. One traditional ceremony from this holiday is called Tashlich. The worshiper goes to a pond, spring or river, where there are fish, and recite special prayers for forgiveness.

Tashlich means to cast away, and they are casting away their sins into the water to be eaten by the fish so they can start the new year from fresh, with a clean record.

Praise God that the New Covenant in the blood of Yeshua causes our sins to be cast away in the Sea of Forgetfulness, as far away as the east is from the west! "And their sins and their lawless deeds He will remember no more." (Hebrews 10:17)

It is believed that between Rosh Hashanah and the last day of Succot (the Feast of Tabernacles) that the Book of Life is opened, thus "pending." Religious Jews have a special Tashlich service where they throw away their old sins from the past year to start fresh. They pray their names will be written in the Book of Life for another year. Tradition says it is sealed again on the last day of Succot.

Praise the Lord, if we have received Yeshua as Savior and Lord, He has inscribed our names forever in His Book of Life, not because of how we have lived, but because Yeshua lived the life we couldn't, and died in our place. This is a wonderful time for self-reflection, but especially of intercession for the Jewish people to know their King and receive eternal life. We know that at the sounding of the last trumpet (could it be the one blown on Rosh Hashanah?), our Savior will appear to take us to be with Him forever!

Many aspects of the Feasts are traditions and teachings that have amazing significance in Messiah. Truly the Fall Feasts, yet to be fulfilled, invoke amazement when we view them in the light of Biblical prophecy. How many things strike you as you read the following statements about Rosh Hashanah?

11 Reasons for Blowing the Shofar on Rosh Hashanah by Chabad:

1) The Return of the King - like trumpets at a coronation, we herald God as King of the universe, recognizing His continued kingship.

2) The Great Alarm Clock - a call to awake from spiritual slumber and examine our hearts on this, the first of the ten Days of Awe.

3) The Reminder - just as the shofar was blown on Mt. Sinai when the Ten Commandments were given, we sound it to remember our commitment to God and reeducate ourselves to study of Torah.

4) The Voice - the shofar is a voice as the prophets were a voice, to remind the people to turn from their sin and serve God.

5) The Tears - we remember the tears shed when the Temple was destroyed. We commit to rebuilding the Temple and ushering in Messiah.

6) The Sacrifice - the shofar, made of a ram’s horn, reminds us of the binding of Isaac and the ram God provided as a sacrifice in his place. We remember the faith of the Patriarchs and our own capacity for self-sacrifice.

7) The Awesome - We are filled with awe and humility as we contemplate the true infinitude of G‑d, how He fills all space and time.

8) The Introspection - We examine ourselves, knowing that the shofar will be blown on the Day of Judgment.

9) The Celebration - The Jewish people will return when Messiah comes and we remember His salvation.

10) Unity - Everyone will be united when the shofar blows and Messiah comes and they will recognize the unity of God.

11) The Scream - The call of the shofar on Rosh Hashanah reminds us of the primordial scream, the eternal voiceless call of the soul expressing its desire to return to its Creator.

We bake a special circular crown challah to commemorate the crowning of God as the rightful King of the universe.

We eat apples dipped in honey, a sweet fruit made sweeter with honey, to signify our desire for a sweet upcoming year. Why the apple? Because it is said to symbolize the Garden of Eden (Gan Eden) and also our love relationship with God.

Traditionally, a fish, complete with its head, is eaten, as well as a pomegranate and sweet foods for a sweet year.

Greet one another with blessings of "L'shana Tova u'metukah!" ("To a good, sweet year!") 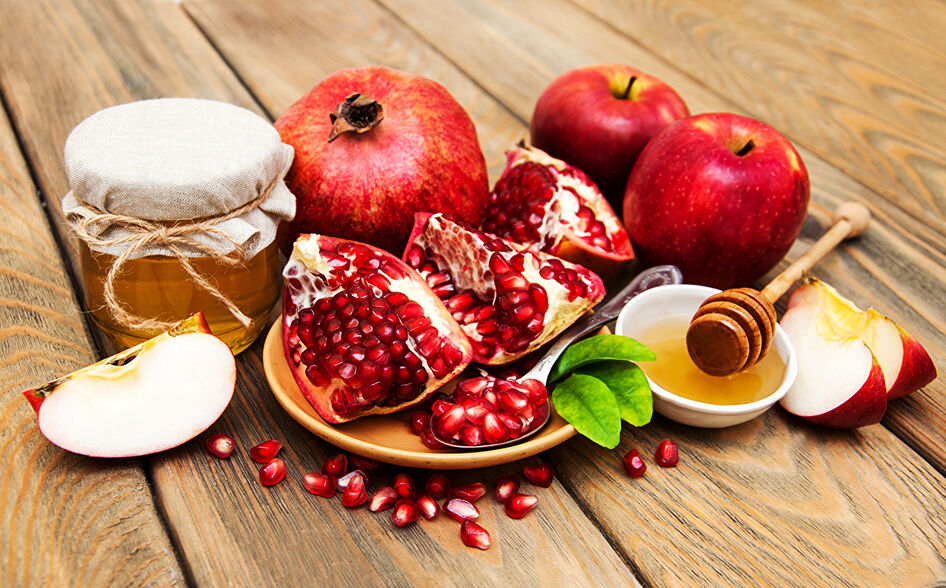